Examples of workflows: Difference between revisions

A workflow is a sequence of steps toward the completion of a defined task used to manage repetitive processes. Workflow modelling helps participants and stakeholders understand the sequence of steps and their roles in the process. It can also help identify patterns, gaps, and bottlenecks to enhance efficiency and improve team dynamics.

Please contribute examples of workflows to the DLF Project Managers Toolkit. If you have examples to share, please provide some context, such as the purpose or goal, institution, teams and team size, any issues or solutions relating to the specific workflow.

The Library Workflow Exchange website: This site is designed to help librarians share workflows and best practices across institutions

Finding the Balance: a Discussion of 6 Digital Library Workflows (2016)

The following are from a panel at the Digital Library Federation Forum in 2016, "Finding the Balance: a Discussion of 6 Digital Library Workflows" which eventually became the article: 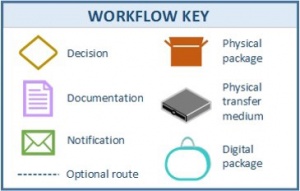 Example 1. Key from the Digital Preservation Management (DPM) Tools workflow model from MIT Libraries (2013-2015). Specifying the conventions used in the workflow in a symbol key or legend assists with clarity and reusability in different versions or levels of detail of a workflow. 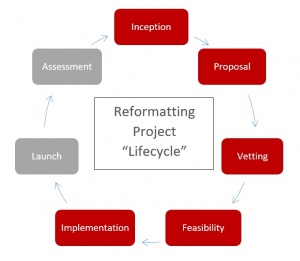 Example 2. High-level “lifecycle” model from The Ohio State University Libraries (2016) laying out the general steps in the workflow; it was developed as a tool for communicating with internal stakeholders who are not directly involved in reformatting collections, as well with peers and colleagues outside of the organization.

Example 3. More detailed view of the same “lifecycle” model from The Ohio State University Libraries (2016) adding the details of the subprocesses involved in each step; this model was created to help team members who are involved in the workflow understand all of the steps involved, in particular, curators, archivists and other collection managers who are interested in proposing a new reformatting project.

Example 5. An analysis of the Metadata Flow through different management systems from the UC San Diego Library (2012). Useful as both a thinking exercise and team building activity, this Prezi diagram presents extensive data flow models to determine the “database of record” or system(s) in which metadata was stored and managed. It also represents the relationships between the different data flow models, including inputs and outputs, and to create an image of the overall landscape.

Example 6. Cross-functional flowchart of the digital object lifecycle from UC San Diego Library (2010)used to show the relationship between areas of the library from digitization to ingest into the digital repository. It was used to determine roles and responsibilities at each step, discuss the coordination and hand-off points, and work through issues, such as a what point and who should be doing quality control? After analyzing the workflow, one major outcomes was for project staff to consult with metadata specialists earlier in the process.

Example 8. A section from the Content Lifecycle Management workflow showing hands to indicate the handshake step when the custody of content transfers from MIT Libraries (2013-2015). The handshake step is explicitly noted to capture the moment that content changes hands and the responsibility for it moves from one group to another. It allows for roles to be defined and staff to be clear about the activities during the handshake. Using the handshake step in the digitization workflow at MIT has provided explicit chain of custody documentation, item tracking, and has ensured that content (physical or digital) is only transferred from one location to another by specifically designated persons at a scheduled date and time. This has also increased staff confidence using distributed digitization workflows knowing that explicit handoff and documentation is expected and can be traced.

Example 9. University of Michigan’s workflow between Digital Content & Collections and the Copyright Office (2016) specifically detailing the roles of the agents between the divisions for creating rights investigation memos for each digital collection created and hosted. Because it identifies the role or skill set, and not the specific person, this workflow will not require constant updating when individuals change positions over time.